First of all, I want to wish everyone a happy and safe Fourth of July! We had an excellent end to our week at Summer Recreation, playing games and doing activities that were all red, white, and blue!

The first activity of the day was to make an American flag using nothing but handprints. We all got our hands a little dirty (with washable paint), and left our prints on a white sheet of paper to make our own American flag. 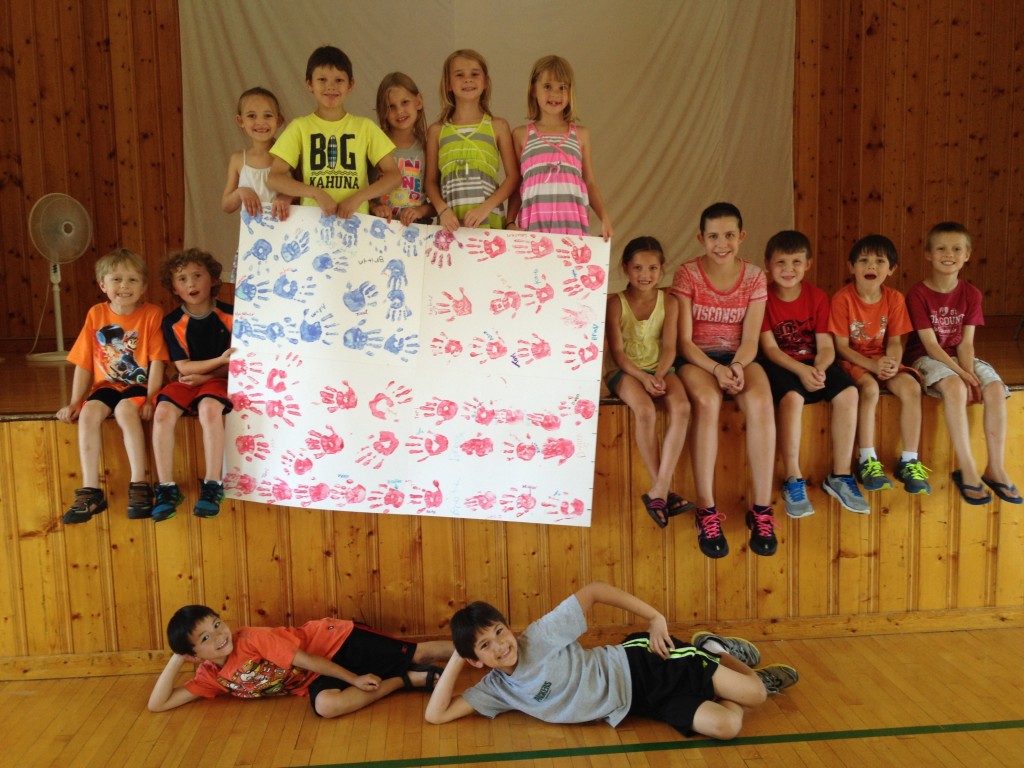 The whole group with our flag.

We headed over to the park while our flag dried, and had a red, white, and blue water balloon toss. All of the campers paired up and did their best to successfully toss balloons back and forth up to the finish line without dropping or breaking them. Easier said than done! Almost everyone ended up a bit wet. 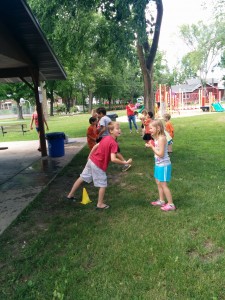 Trying not to bust those water balloons! 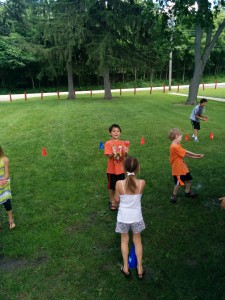 Israel and Alex trying to be verrrry gentle!

The kids dried out during a little bit of free time at the park, followed by Capture the American Flag. There was plenty of strategizing involved: where to hide the flag, how many players on offense, how many on defense… We played two rounds and each team won one round. Great job to both teams!! 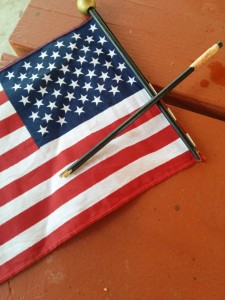 The only casualty from Capture the American Flag.

We enjoyed a snack and Kool-Aid at the park before heading back to the Community Building for a red, white, and blue taste test and some US Flag trivia. Three campers at a time joined Sophie downstairs to test their tastebuds. They were blindfolded and given a few different red, white, or blue foods to try and guess which color the food was, and identify the food. Some of the foods included were: ketchup, blueberry jam, salt, salsa, blue gushers, and mayonnaise. Could be a fun activity to try at home this weekend! The remaining campers stayed upstairs with Lauren and had the challenge of trying to match and order a series of flags and years chronologically. Believe me, it was no easy feat! The kids did a great job using their logic to figure it out. After they got the correct order, we talked a little bit about why some of the flags were special–like the flag made by Betsy Ross, the flag made after Wisconsin became a state, and the 1876 centennial flag.

We had a great time learning about the US this week and we hope you are all on your way to the fireworks and entertainment at Legion Park starting at 7pm! Wherever you are, have a great Fourth of July!